History of the League of Women Voters - LWV

History of the League of Women Voters - LWV

THE FIGHT FOR WOMEN'S RIGHT TO VOTE

When the the U.S. Constitution was written in 1787 it did not delineate who was eligible to vote. This was left to the individual states. At the time, no state permitted women to vote.

In 1848 women began to organize to seek the right to vote. In 1890 the National American Woman Suffrage Association (NAWSA) formed out of a merger of previous groups. The NAWSA pursued women's suffrage at both the state and federal levels. 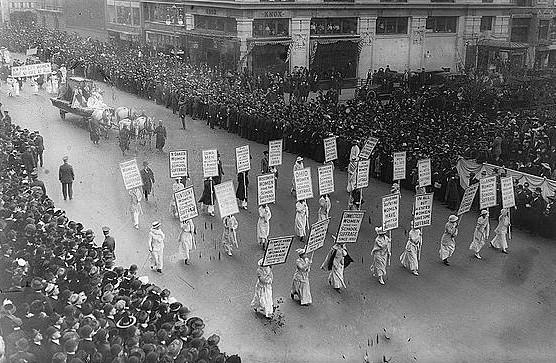 Finally, in 1918, President Wilson changed his position, and supported the adoption of the 19th Amendment to the constitution.

The 19th Amendment to the Constitution was ratified in August, 1920. It stated:

FORMING THE LEAGUE OF WOMEN VOTERS

In her address to the National American Woman Suffrage Association's 1919 convention in St. Louis, Missouri, President Carrie Chapman Catt proposed the creation of a "league of women voters to finish the fight and aid in the reconstruction of the nation."  The League of Women Voters (LWV) was formed within the NAWSA, composed of the organizations in the states where suffrage had already been attained.

The next year, on February 14, 1920 - six months before the 19th amendment to the Constitution was ratified - the League was formally organized in Chicago as the national League of Women Voters. Catt described the purpose of the new organization:

Maud Wood Park became the first national president of the League and thus the first League leader to rise to the challenges. She had steered the women's suffrage amendment through Congress in the last two years before ratification and liked nothing better than legislative work. The 1920 LWV convention gave her the opportunity to continue her efforts.

From the very beginning it became apparent that the legislative goals of the League were not exclusively focused on women's issues and that citizen education needed to be aimed at all of the electorate, not just women.

Since its inception, the League has helped millions of women and men become informed participants in government.

The first League convention in 1920 voted 69 separate items as statements of principle and recommendations for legislation.

They were grouped in broad subject areas:

You may have heard that the League originated nationally televised Presidential candidate debates. That's not totally correct. The famous Kennedy-Nixon debates of 1960 were created and moderated by television news agencies. After that, no national Presidential debates were held in 1964, 1968, or 1972.

The League of Women Voters sponsored and moderated national Presidential candidate debates in 1976, 1980, and 1984. Many people joined the League during this time, as these debates introduced them to the League and they chose to support our work.

So why did the League stop sponsoring Televised National Presidential Debates?  The short answer to the question is that in the 1988 election, the Democratic and Republican parties, jointly, decided to run the debates themselves.  The ground rules they setup for these debates were something the League could not support.  The following links, to press releases and press conferences from 1988, explain this decision:

State and local Leagues across the country continue to host debates for candidates running at all other levels of government, from U.S. House of Representatives and Senate to statewide offices, to city government and everything in between. The grassroots nature of the League enables us to engage communities in the process by hosting debates and other election activities. In California, the League maintains the  VotersEdge.org website to help in providing that information.

Many things about the way the League works have changed over the years, including the decision in 1973 to include men as full members.

The League of Women Voters has always been a political organization, encouraging informed and active participation in government, working to increase understanding of major public policy issues, and influencing public policy through education and advocacy.

It is also a nonpartisan organization, not biased for or against any candidate or political party.

For more about our history, try League History and LWV Through the Decades from the League of Women Voters of the US. You may also be interested in the Transformational Journey Video.